Blog - Latest News
You are here: Home / Blog / Which Squat Variation Should Athletes Use? 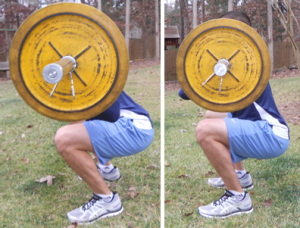 Which Squat Variation Should Athletes Use?

Squats are a corner stone lift, however, I don’t back squat all athletes.  I prefer the front squat variation to the back squat depending on the situation.  There are times where even front squatting could be discarded and I’ll go with single leg variations. A lot of coaches may take issue with this view-point (that the low back was the weakest link in the bilateral squat lift and one could get better results with semi – heavy single leg training).

I agree with this assessment that the low back is a limiting factor and if you have someone lift a lot of weight in a single leg stance it doesn’t necessarily correlate to bilateral lifts. For example if you can get an athlete to lunge with 225lbs it doesn’t mean that he can necessarily squat 450lbs.

As strength coaches, our job is to teach movements and while there are an infinite number of ways to improve strength, I feel that there is tremendous value in using the squat while training athletes. Ultimately, it comes down to which variation of the squat front or back, limits the amount of risk while still providing a training effect.

In my opinion, the front squat is the safer choice for the majority of athletes and while also improving movement and performance markers implications such as the vertical jump and broad jump. However, box squatting has become a huge favorite.

The analyses joint motion at the hip knee and ankle and compares the two lifts and the data might surprise you.

There is more movement in the knee-joint during the back squat than the front squat which might be contrary to what most people think. That’s interesting to take in terms of knee pain and while squatting for some with knee pain won’t be an option it seems that the front squat is the more knee friendly of the two.

Now obviously there can be discrepancies between two people and what their squat looks like but in general the front squat allows you to keep the upper back more upright and its easier on the low back because of the reduced torso angle.

One benefit of the front squat is that it hammers the anterior core and works the obliques and rectus abdominis.  The load shift to the front forces a posterior tuck of the hip to engage the abs and glutes to keep the hip neutral. Most athletes generally are weak in this area so anytime you can shift the load to the front during an exercise you should.

During the back squat, it is much harder to keep a neutral spine and it will force more compression in the low back as you arch our back. Arching the low back disengages the abs and glutes and puts you in a mechanical disadvantage and puts a lot more work in the low back instead of having the glutes and abs help out.

This isn’t to say that back squatting will lead to low back issues but keep in mind that for the majority of athletes who “live” in extension the back squat reinforces the pattern and might not be the best variation for them.

We don’t back squat our overhead athletes, mainly because of the position it puts the athletes shoulder in. Since most throwers/tennis players need external rotation range of motion and generally have more range on their dominant/throwing side, putting them in that position can cause some instability in the joint and we feel there are “safer”  options such as the front squat.

While the front squat is a great variation for throwers, if they have A/C joint issues or injuries the pressure of the bar can aggravate that. In these cases use the safety squat bar for either front or back squats. We also have harness front squat variations as well.

I’ll put a post up of some different variations we use at NPF in a future post.

There is a more research needed to fully examine which squat helps improve vertical jump and broad jumps the most. However, if the goal is to minimize risk while improving performance I feel like the front squat is still the safer option.

While I have talked about the benefits of front squatting this isn’t to say that I don’t like back squats. Most athletes need to work on improving movement patterns, and again the goal should be maximizing performance while minimizing risk of injury.

I think it is well said to say something to the effect of how you train your athletes and how you train yourself should not be the same. Just because you may have a bias towards a particular system or a set of specific exercises doesn’t mean your athletes need to train that way. Be diligent and match exercises appropriately to athletes who can perform them with solid technique.

Minimizing risk includes appropriately pairing the squat variation with the athlete while considering multiple factors. This is why we assess athletes and while we like the front squat there still may be instances where squatting might not be the best option for them. The last thing you want to do as coach is have an athlete tweak or injure something while lifting in the weight room.

Why Young Athletes Should Train Smarter, not HARDER!