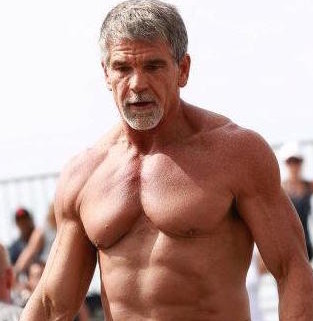 Being A Life-Long Athlete Keeps Your Mind And Body Strong.

I think we all know that as we get older our mental and physical abilities start to decline. But the study of sciences have shown this.

Between the age of 40 and 50, the sedentary can lose more than 8 percent of our muscle mass. And the percentage of atrophy can increase to 15 after 75 years of age and years after.

These are stunning results to some though the reality that most don’t know is the target of these test studies are on sedentary adults , as Andrew Wroblewski and his colleagues point out in their recent study published in The Physician and Sports Medicine Journal.

The question that should be asked is what about those life long athletes… Masters athletes? Limited research has been looked into how the muscles of masters athletes, whose life involves daily exercise,  decline, or don’t, as they get older. Wroblewski et. al. took muscle and body composition measurements of 40 high-level recreational athletes.

The subjects, 20 men and 20 women, ranged in age from 40 to 81 years and practiced their sport, primarily running, biking and/or swimming, four to five times per week.

Aging Alone Does Not Affect Muscle Mass Or Strength.

By measuring lean muscle mass, body fat composition and mid-thigh muscle area, along with taking MRI scans of the athletes’ quadriceps, the researchers observed that these masters competitors preserved muscle mass even as they aged.

The results showed that mid-thigh muscle mass and lean mass did not increase with age. But it didn’t decrease either. And, the older athletes seemed to maintain their muscle mass even though their body fat increased, relative to the younger competitors in the study.

These observations suggest that body fat was accumulating in places other than within the muscles, which is better for maintaining muscle strength. Tests on the subjects’ quads strength also showed that it did not decline with age either.

TRUTH: USE IT or LOSE IT

In other words, this new study flat out contradicts all of the previous research suggesting that all of us will lose muscle mass and strength simply by growing older.

Instead, the authors argue, the muscles atrophy because they aren’t being used. They also suggest that if more individuals stress their muscles as they age, it may reduce the physical decline, falls and loss of independence that frustrate and inhibit many senior citizens.

The authors also note that it’s these aspects of aging that tend to increase health care costs, so if each individual continues to develop their muscles as they age, the exercise could channel those unspent billions back into the economy. 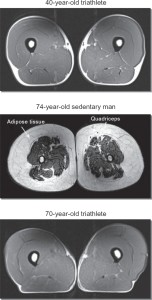